Welcome to the third devblog for Warfare 1944. The team has been hard at work adding in new features to the game, as well as adding an overall polishing pass on existing content. Soon, we will be wrapping up some last priority items for Warfare, and then shifting our focus towards Operation: Harsh Doorstop to get that up-to-date with the relevant improvements that have been made for Warfare. Once O:HD is brought up to speed, we will begin conducting more regular playtests for that as well, so keep an eye out for when we will be announcing them (make sure you are subscribed to Bluedrake42 on YouTube, are a member of the DRK Discord[discord.gg], and you are watching the Steam page to stay on top of our playtest schedules).

For those wondering, keep in mind that just because we are going to be diverting our attention towards O:HD doesn’t mean Warfare will not still see improvements in the coming weeks and months. This is the beauty of developing the OHDCore framework that both games are built upon—work that will be completed for O:HD to advance the framework will become immediately available for Warfare to take advantage of and vice versa, so both games will essentially improve alongside each other.

Now let's get into the work that has been completed for Warfare 1944 during the month of July:

P.S. There is a full game key for Warfare hidden somewhere in this devblog—if you find it let us know in the comments! Feel free to give it to a friend if you already have a copy.

The level design team has been hard at work the past month working on our new Pacific Theater map, Guadalcanal. Last devblog we shared a very early landscape heightmap blockout for it, and now we are already at our first release version of it, which you can find featured below: 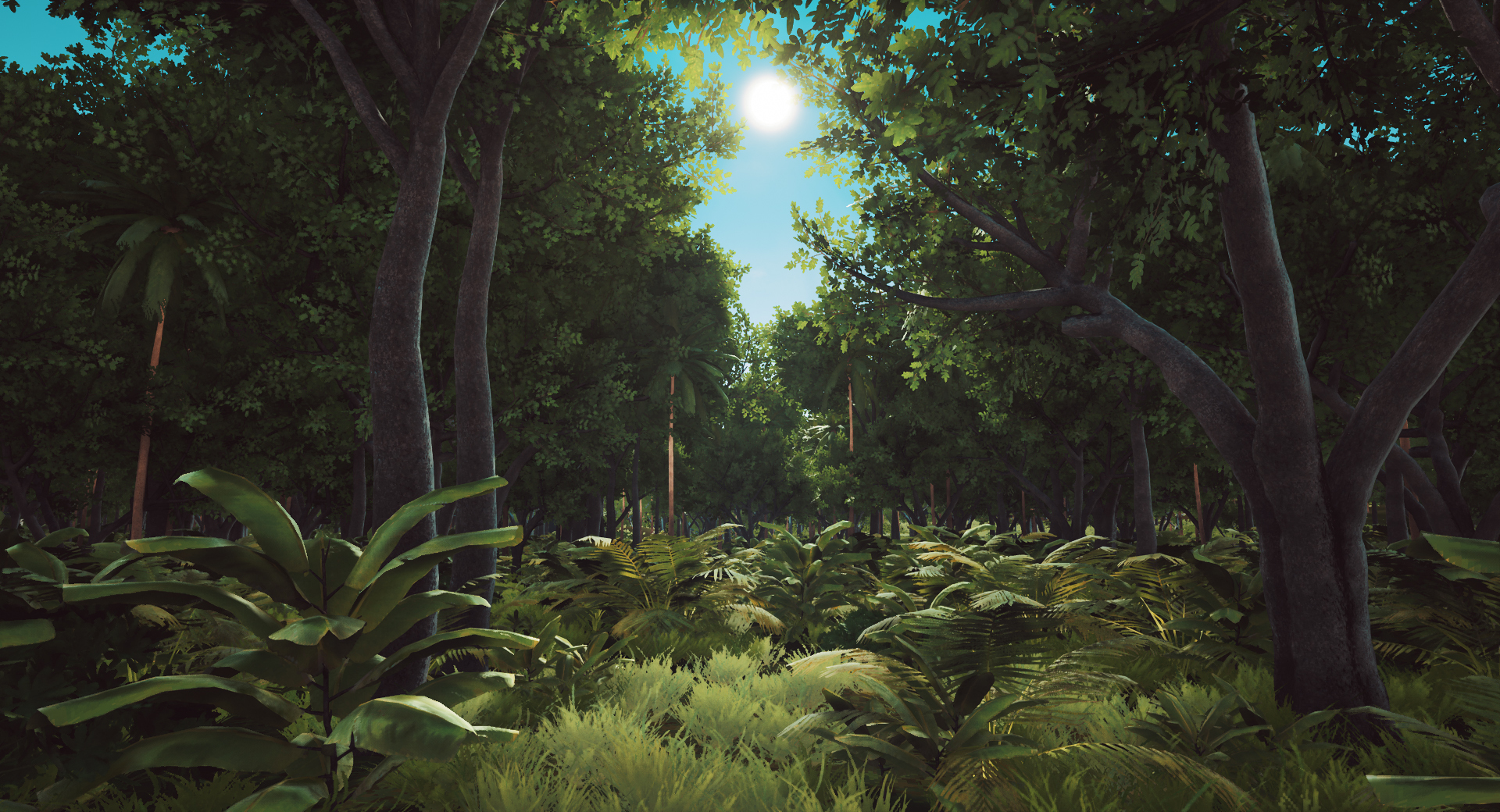 Guadalcanal’s land mass is approx. 3x2km in size (which is of course scaled down from the real world size for gameplay purposes; the entire map including water is roughly 4x4km), and features dense jungle environments, which is going to make for some crazy firefights and combat scenarios. Players are going to have to mix up and revisit the tactics that they have learned to implement on other maps like Utah or Carentan in order to adapt, and we can’t wait to see how people play on it.

We have also created brand new tree, foliage, and rock assets for use on Guadalcanal and our future Pacific Theater maps: 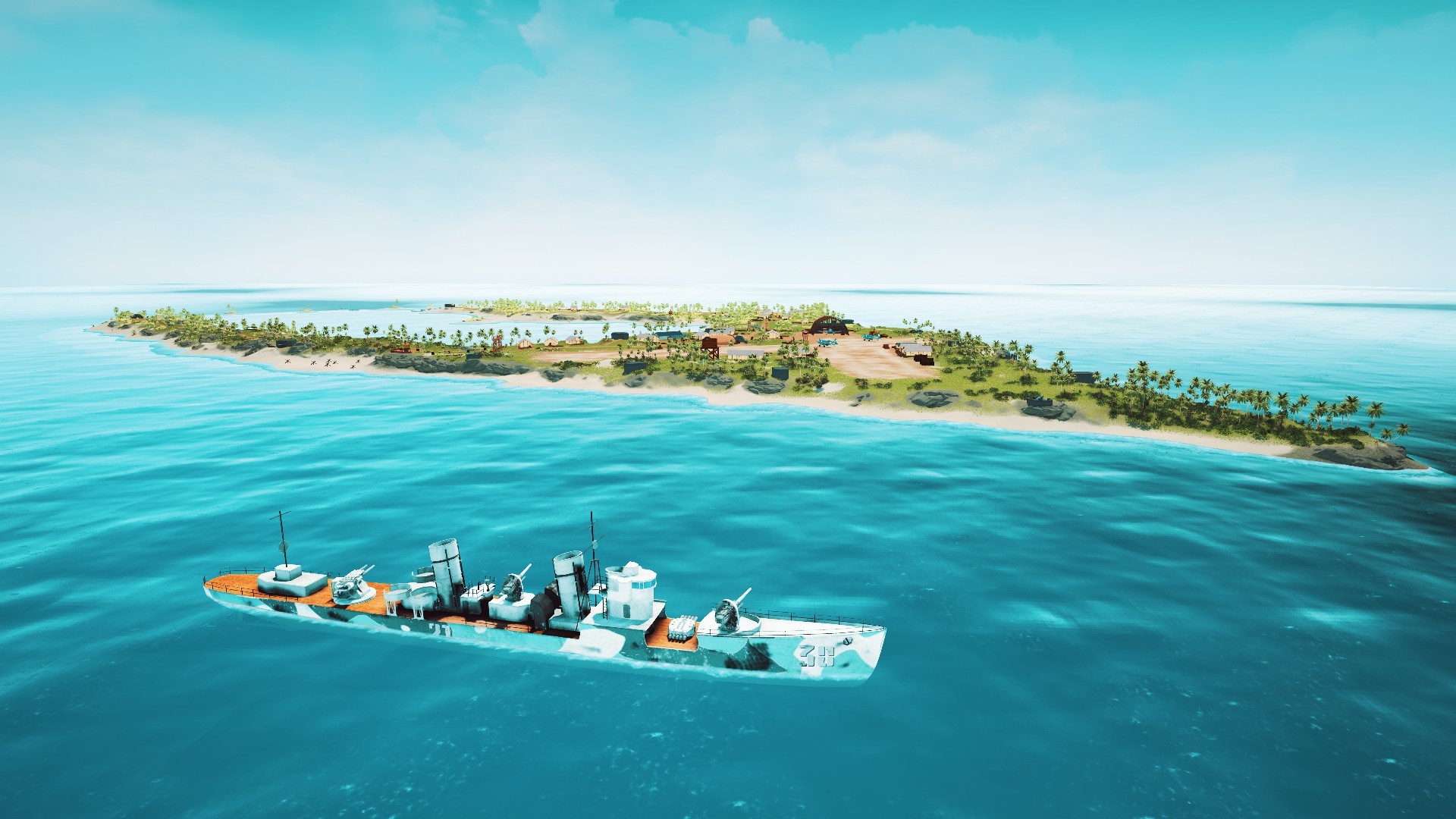 We have nothing new to share for these maps this month, so here is a pretty photo of Wake Island with one of the completed ship models. All 3 maps simply underwent optimization work and more detail passes, but there is not much more to show off with them at the moment.

In the past month, a lot of work has gone into texturing models/assets that were made in the months prior. Any new models that have been made have been in contribution to the upcoming Japanese and Russian factions, as well as new weapon assets.

The USS Saratoga and Japanese Hiryu aircraft carriers that we showed off last devblog have now been fully textured, and are undergoing optimization passes.

The US Jeep and German Kubelwagen have now received a new set of textures that coincide with the improved textures we have been making to old placeholder ones. 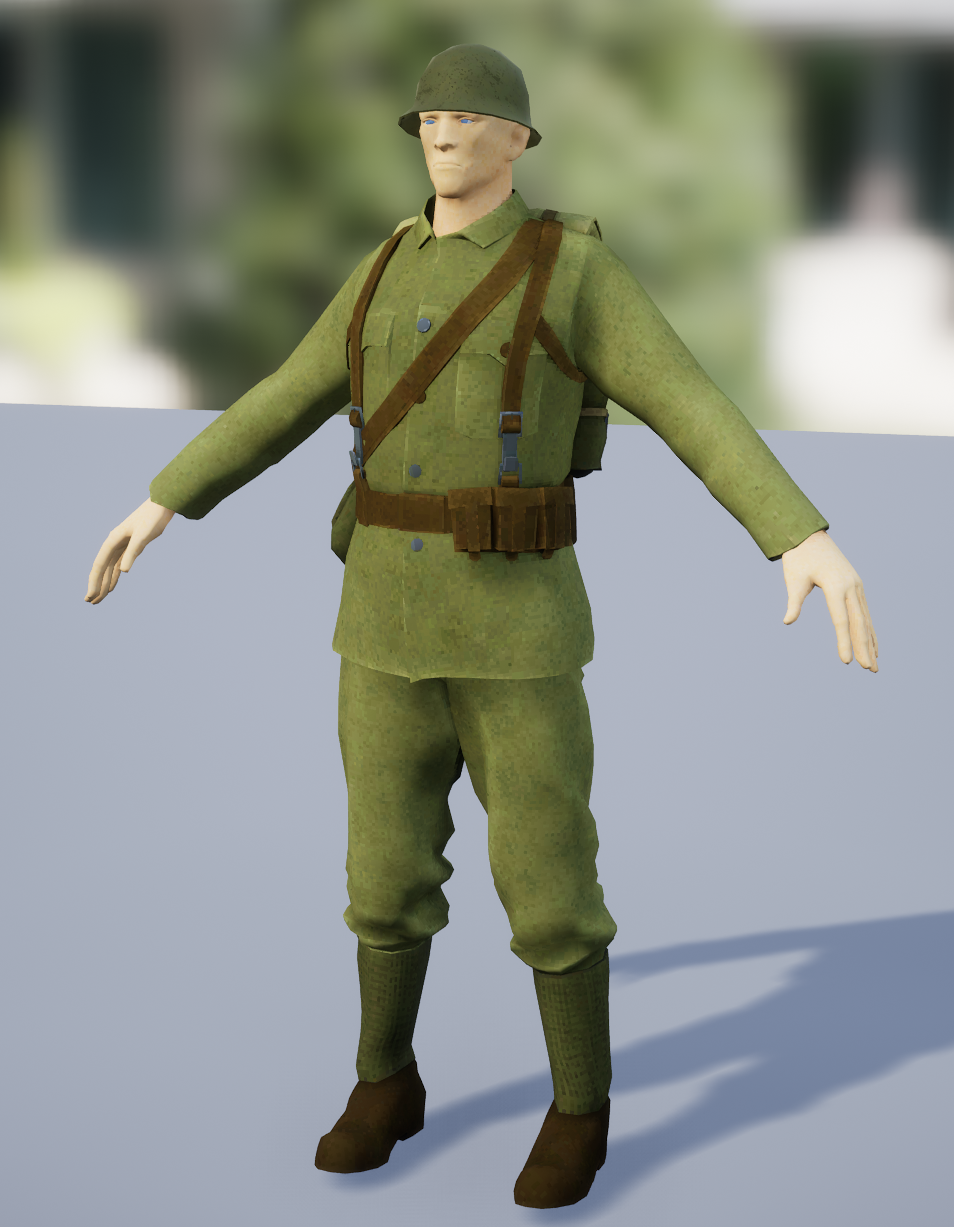 The Japanese faction is finally almost ready to be released! All models have now been made and textured, and are awaiting animations. Once animations are complete and hooked up, it is just a matter of the programmers finishing off the multi-faction system and they will be ready to implement (more on that below). 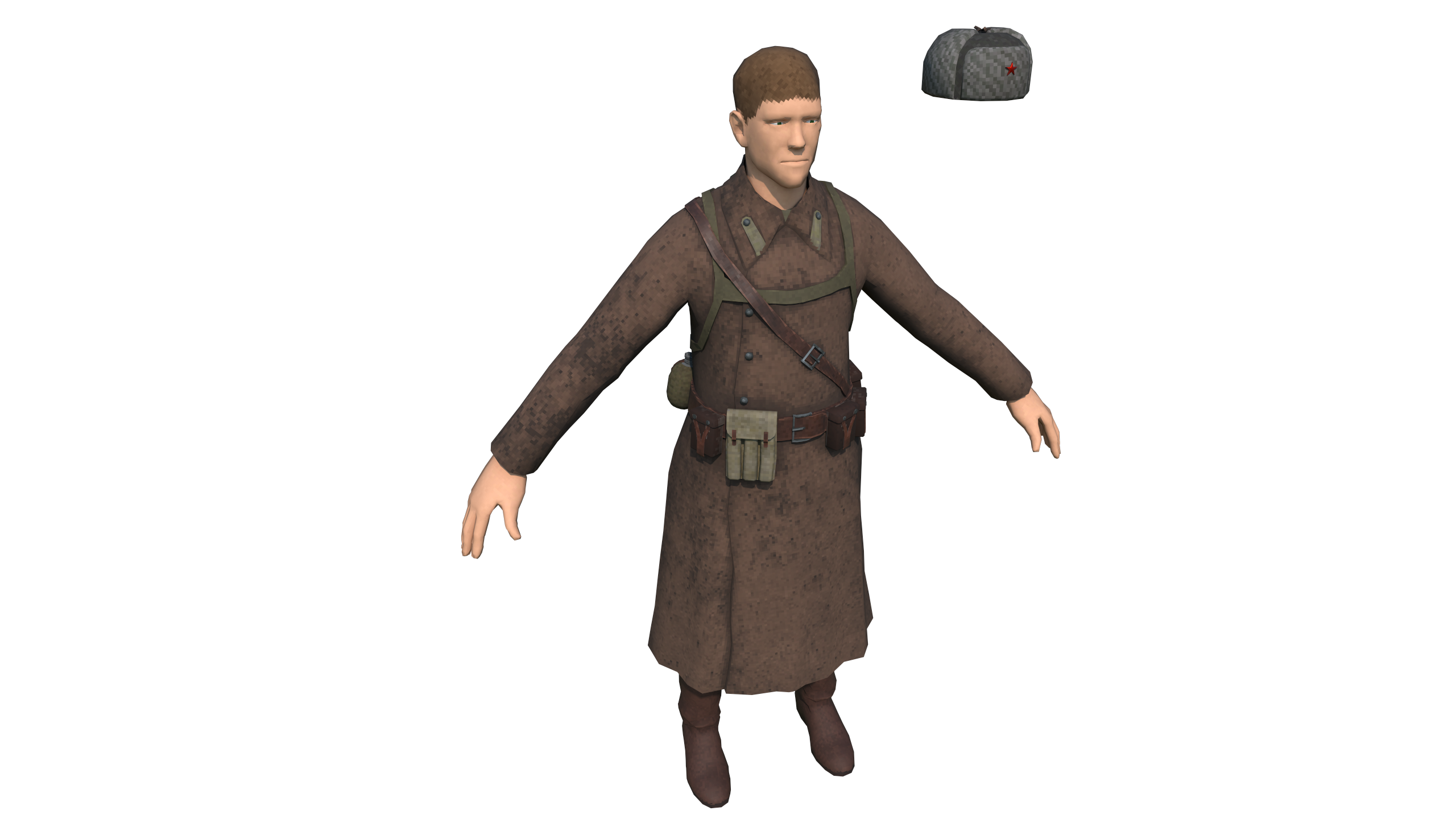 Work continues on the Russian faction—most models and textures are now complete and, just like the Japanese faction, are awaiting animations and the multi-faction system. We also likely will not be implementing the Russians until we have a proper Eastern front map to implement them on, but once we have that ready they should be good to go and ready for testing.

Some of the largest changes made to Warfare in July came to the weapons. We now have functioning grenadier kits with rifle mounted grenades, launchers, and machine guns. Firefights are now much more interesting and dynamic with the ability to utilize a variety of explosives other than thrown grenades, and the implementation of machine guns is going to change up how teams control different areas of the maps. Please keep in mind, as with most other aspects of the game, all of these new weapons are a work in progress and will be improved/refined over time.

In addition to the new weapons, we have also completely retextured all of the existing weapons in our new pixel art style, as well as the first person arms so there is more consistency throughout. Everything in Warfare should start looking/feeling more consistent and polished compared to what we had available at launch—if you played with the old textures let us know in the comments what you think about the new ones!

Static Guns, Emplacements, and Other Weapons

Several of the static guns and emplacements that we showed off in the last devblog have now received textures. Some of the depth charges and torpedo models that will be used in naval combat have also received textures. Lastly, US and German factions now have mortar models textured and ready for animations and integration. 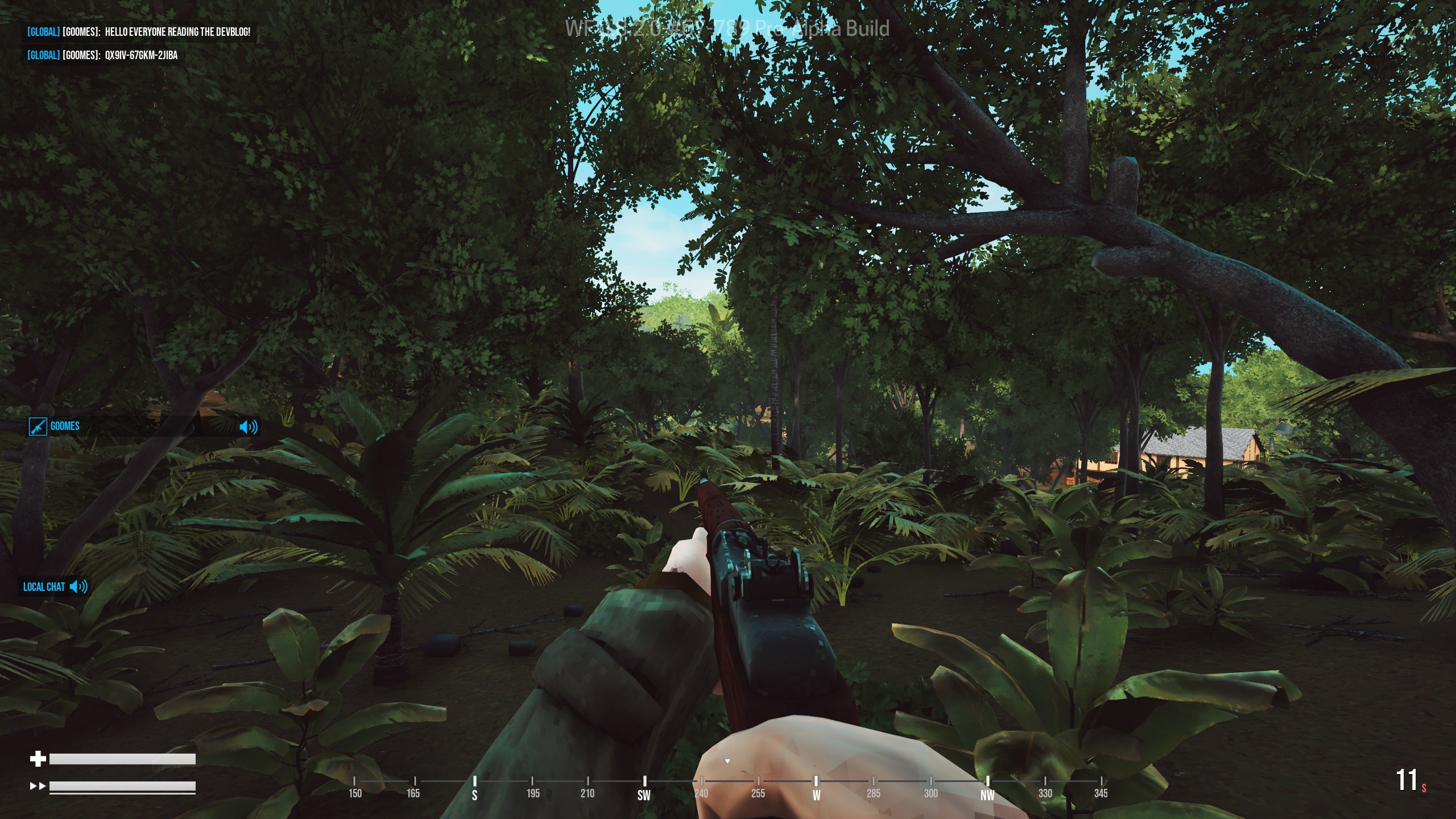 Our first implementation of server wide text chat and VOIP indication are now in, so now it should be a lot easier to tell who around you is speaking, and communicate with the rest of the server via text. These systems will of course be expanded upon and further improved/refined, but now the base functionality is in which was our biggest hurdle. We will continue to share more on improvements we plan on making down the road to these systems. 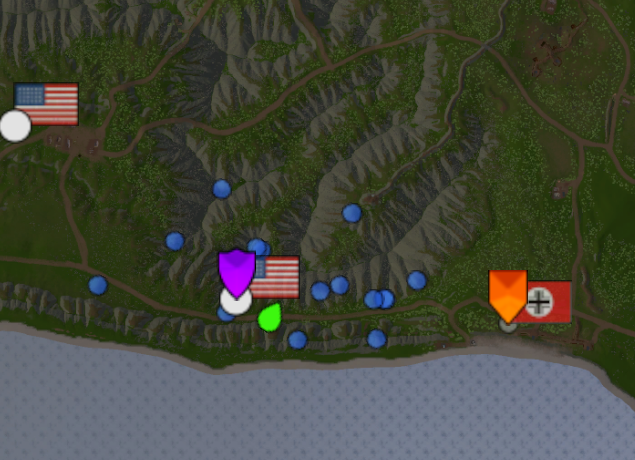 In addition to the text chat and VOIP indicators, we have also done some updates to the map UI, including adjustments to flags, and player and map icons.

Multi-Faction System
In the current version of Warfare, it is only possible to have the US and German factions active in the game (which is one of the main reasons you will find Germans on the Wake Island and Guadalcanal maps right now). However, very soon we will have the multi-faction system implemented, which will allow us to have a variety of factions that we can swap in and out of all of the maps to fit whatever is most appropriate. This system is a prerequisite for bringing in the Japanese and Russian factions. This will also be an important feature for us when it comes to scaling up the amount of available factions for you all to play as (such as the British military, and others).

Server Admin Tools
The basic features server owners/admins will need in order to run their servers are now in, including but not limited to RCON functionality, kicking and banning, map changing and cycling, and team auto-balancing (which should now only occur to players that are dead—no more getting team switched while you are alive). Systems we still need to implement for server owners include whitelisting, the ability to block VAC banned players from joining your server, and the option to turn on vote kicking. Reminder that you can reference our server setup guide for more information on how to setup and run a server.

Old images of the rally point, med bag, and ammo bag that we showed in the first devblog—these will likely receive a retexture like most other objects in the game

Deployables are a core feature that we have not covered since the first devblog where we showed off the images above. The programmers are now going to begin shifting focus towards getting these systems implemented, so pretty soon squad leaders will be able to setup rally points for their squads to spawn on (which means you will no longer be able to spawn on the forward-most flag), medics will be able to utilize med bags to heal teammates (which means auto-regenerating health will be going away), and riflemen will be able to drop ammo bags to resupply their teammates (which means total magazine/clip amounts that each class spawns with will be reduced). This will be a pretty major change to the way the game is currently played, as players will be incentivized to play their classes, and teamwork and tactics will become a lot more important to take into consideration when attempting to advance or hold the front line—we look forward to seeing how everyone adapts.

Keybind and Control Customization
We recently brought on a new programmer to the team that is tasked with bringing in the custom keybinds/control system. This one has been a long time coming, and we know a lot of you have been asking for it, so fortunately it will be a reality here very soon!

We showed off the new flag capture concept interface in the last devblog, so this is just a repost of the same image, but we are sharing again because this should be coming in the near future. 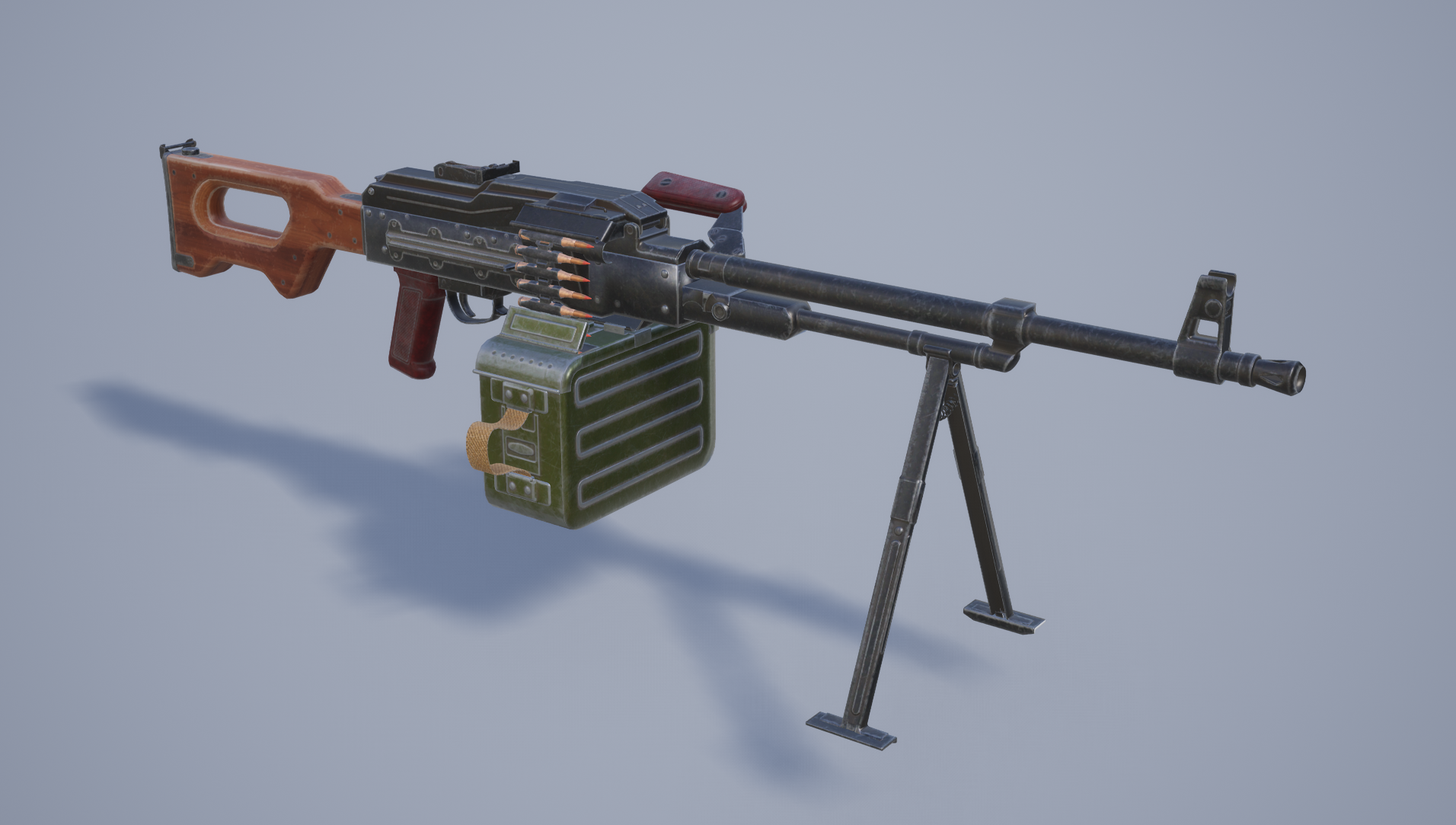 As I mentioned in the beginning of the devblog, the team is starting to shift focus towards bringing Operation: Harsh Doorstop up to speed with the improvements that have been made to Warfare, as well as getting started on new content to bring into the game. Once the game has started to receive these changes, we are going to start holding playtests again since there will actually be things we need to test and get feedback on, and/or want to show off.

Our first proper devblog for O:HD will be coming next month. We initially planned to have one ready for this month, but next month we will have a lot more to share with you all so we figured it would be best to just wait till then since the team is still slowly shifting to it from Warfare. Until then, enjoy some images of one of the in progress maps, Khafji, and a shot of the PKM model which Bluedrake recently showed off on his YouTube channel.

Thank you to everyone that took the time to read the devblog. We are hosting a big playtest for Warfare on Friday, August 21 at 2:00PM EST where we will be playing on the new map and testing out the new rifle mounted grenades, launchers, and machine guns in dense jungle combat.

If you would like to get in touch with us, use the links down below, otherwise we look forward to seeing you all on the battlefield!